SIPs Selected for the Award-Winning American Indian Hall in MT

Both a work of art and an educational resource, the hall is home to the Department of Native American Studies and the American Indian/Alaska Native Student Success Services office. Today, students enjoy the 31,317 s/f hall as a home away from home, a place to commune with one another and find academic support.

The project itself was years in the making, with early planning beginning in 2005. After nearly sixteen years and 20 million dollars invested, what once was a dream for MSU has been finally realized.

Many agree that the hall represents a bridge between American Indians and other cultures on campus. A dynamic expression of Native American culture, the American Indian Hall was designed by ThinkOne Architects and built by Swank Enterprises.

As part of the stunning roof structure, the design team chose curved custom structural insulated panels (SIPs) to provide top notch insulate and accommodate the unique design. Inside the hall, visitors can also pay special attention to the walls which were designed to appear to have a circular shape, also made of SIPs.  Additionally, the structurally self-sufficient SIPs had only a positive impact on the project’s energy goals.

With a goal of achieving the highest level of energy efficiency without taking away from the beautiful Native American expression, SIP construction was a natural choice and integral component of the design. The exterior walls and roof structure could highlight the desired forms while simultaneously providing a high-performance building envelope. 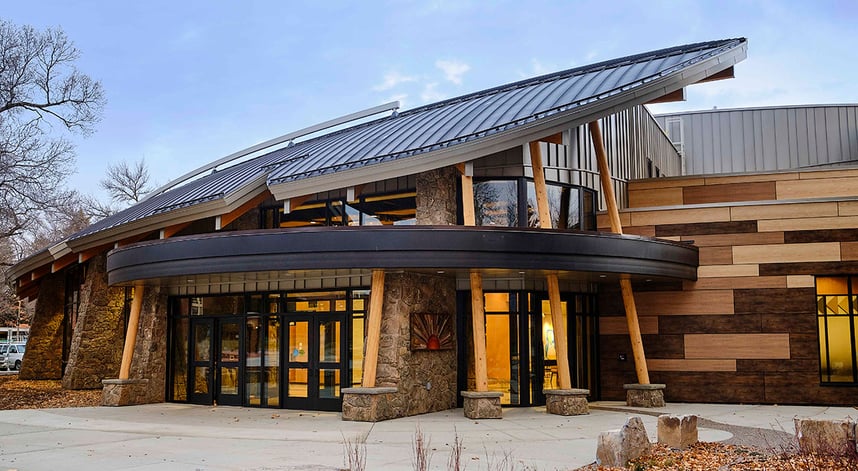 The curved panels that were utilized, simplified construction of the complex building forms. Integrated elements such as shapes, colors, and visual creativity allowed for the building’s main symbolism of a single, rooftop feather to be seen just above the hall’s main entry. The sculptural feather roof element in particular was simplified by the use of curved panels.

For this project, the design philosophy was centered on the “connection to earth”. In keeping with this, the building design utilized materials with highly recycled contents throughout. Notable key elements would be the exterior finishes, Stone Wood sliding panels, and metal siding and roofing. 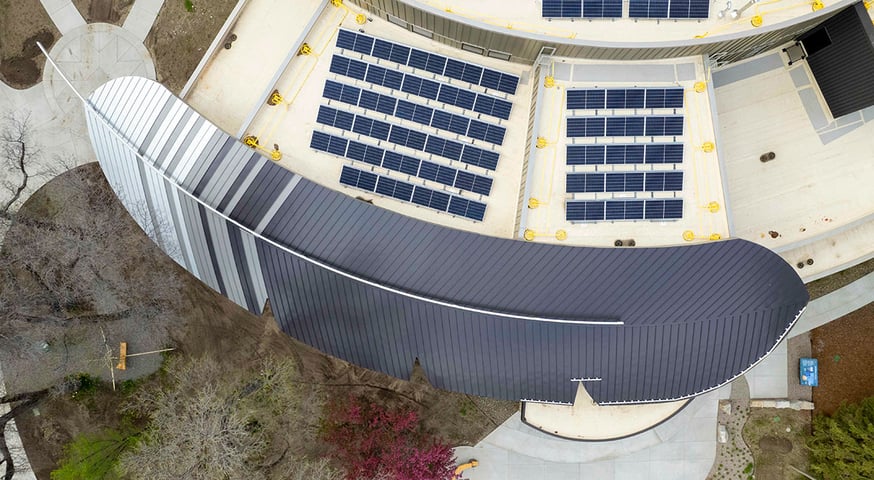 In the interior, flooring selections were made for carpet and vinyl tiles with high percentage of recycled or low VOC materials. Conference tables were custom-made from Ash trees that were salvaged during the initial removal of the site. In the Drum Room, gravels were gathered from all eight recognized Native American tribal areas in Montana and used in the ground and polished concrete floor.

LEED Platinum Certification is one of the highest ranks of all sustainable certifications that a commercial project can achieve. A key factor in receiving such, was having the panels manufactured offsite. Doing so allowed for significantly less material waste attributed to the building of the structure. To further solidify LEED status, ThinkOne also incorporated high-performance glazing and recycled materials, a geothermal building heat and cooling system, and solar photovoltaic systems.

This project specifically brought significant attention as it was planned with such integrated thought for sustainability, construction, and heritage. Other notable sources who found an interest in the project included:

For further project information including historicals, other notable sustainable building features, imagery, and key participants, you may view the entire project portfolio by visiting: https://sips.premierbuildingsystems.com/project-portfolio/aih-uofm

The vast majority of builders in the U.S. now face demanding energy codes. Learn more about those energy codes on our blog..

The U-Factor Method is the most accurate for determining performance values. This Premier Tech Talk explains the U-Factor..

The Cost Benefits of Building Green

Does it cost more to build green? Only in the short term! Read our blog to discover the cost benefits of building green..

As the oldest manufacturer in the SIPs industry, Premier’s SIP system is the proven prefabricated building envelope framing system for your next commercial or residential structure. Faster, stronger, and greener than outdated lumber framing methods, SIPs are the future of framing. Join the other thousands of structures built with SIPs, and contact the expert in your local region to get started.